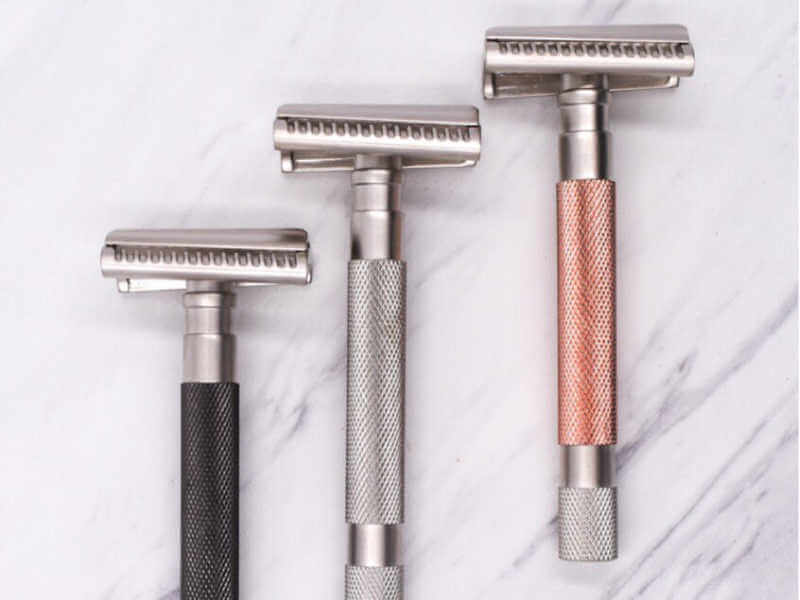 Parker has just launched their 55SL “Semi-Slant” razor. They sent me a pre-launch sample a few weeks ago to use. Is it a “kinder, gentler” slant bar razor?

Note: Amazon links are affiliate. I was involved with the testing process of the head late in the project.

Slant bar razors are a niche’ within a niche’ in the wet shaving community. Interest in them seems to wax and wane, with different models in the market appearing then disappearing, though a few like the Merkur 37/Merkur 39 soldier on.

A slant razor’s engineering is designed to make them cut hair from an angle instead of straight-on (think of a snow plow’s blade moving snow)–the idea being it’s a more “efficient” cut. The efficiency can be somewhat (though not as reliably) replicated with a shave stroke technique I’ve called “The Gillette Slide.”

Slants generally have a reputation as “aggressive” razors, though. My first experience with a slant years ago was a bloody affair….

The Parker “Semi-Slant” double edge safety razor has the advantages of a slant razor (more cutting surface on each whisker due to the blade angle) without the aggressiveness and dramatic blade exposure associated with other slant razors. It delivers an incredibly close and comfortable shave.

Parker’s Semi Slant is milder than the typical slant, thus the reason we called it the “Semi-Slant”. However, the blade angle is still torqued so that it will cut the hair at an angle instead of straight on, resulting in very efficient shave.

The advantage of a slanted blade angle is that it cuts more precisely than a straight on motion that most other razor designs employ. Since slant razors cut beard growth more efficiently, they are great for those with thicker and more coarse hair. This advantage is also felt for those with sensitive skin since the cutting action is gentler on the skin. We recommended using very little pressure when shaving with our Semi-Slant for excellent results.

There are three handles available: a Satin/Chrome handle, a Graphite handle, and a Rosegold handle. They share the same head (Zamak).

My Experience With The Parker Semi-Slant

Parker sent me a razor several weeks back with the production head on another handle (the production handles were not ready yet) for testing and feedback. I popped in a Parker blade (coincidentally I find Parker blades pretty smooth and “forgiving” and they’ve become my go-to blade, particularly when I’m testing a new-to-me razor), lathered up with a cream I knew had excellent cushioning characteristics for me (OneBlade’s “Black Tie” shave cream)–just in case, you dig?–and gave it a few tentative strokes.

Right off I noticed it was noticeably milder-feeling than other slant bar razors I’ve used. There is still some blade feel and a decent amount of feedback but not overly-so. I always had to be careful when it came to slant’s, using a very light touch and very focused attention, but I became more confident with this razor quite quickly. It still definitely has the characteristics of a slant–it seemed to cut “efficiently,” with less cutting force required like other slant bar razors–but without the typical slant aggressiveness.

My follow-up shaves with different combinations of creams, soaps, and blades were all excellent: smooth and efficient without being overly-aggressive. I prefer milder razors generally and the Parker 55SL “Semi Slant” quickly became my favorite slant razor and I have found myself turning to it in my regular rotation of double edge razors I use.

I received a razor with a production handle a week ago and the shave was the same.

I like to call the Parker 55SL Semi Slant Razor a “kinder, gentler” slant bar razor. It’s definitely milder than other slants I’ve used, with less torque and blade exposure, but still very “slant-ish” (if that’s a word). If you’ve been wanting to try a slant bar razor but were leery of their aggressiveness, this razor just might be your ticket.